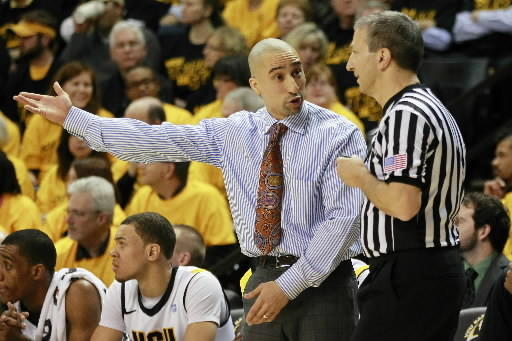 The report was as unofficially official as it could possibly get. Shaka Smart was already on his way to Milwaukee. It was a done deal. What could’ve gone wrong?

Well, a lot of things, apparently. Immediately after reports had surfaced, the brand of havoc Shaka Smart established at Virginia Commonwealth University took the Twitter world by storm. For roughly an hour and fourteen minutes, the entire Marquette fan base went absolutely ballistic on Twitter, spewing a constant stream of exhilaration in 140-character intervals. It was as if we had been plopped in front of a television with the Providence game on eternal replay. Crushed dreams, however, have become part of the daily life of Marquette fans — so when the Marquette Tribune suppressed the virtual riot by refuting the rumors, the fan base and program’s retreat to disappointment was more familiar than it ever had been. After that, however, the situation became a lot more complicated due to conflicting reports and, of course, a healthy amount of stupidity. I don’t believe there are enough adjectives that could correctly capture the essence of this deemed “journalism crapstorm,” so as to experience the Twitter Dumpster Fire one last time, let’s go through the tweets in order.

Hearing from multiple sources that Shaka Smart to Marquette is after all very likely to happen and happen soon.

There’d been rumors about Shaka Smart considering Marquette for quite some time before this incident, but none seemed to carry actual information rather than speculation. This tweet, however, was different. Jerry Meyer, the highly-respected scouting director at 247 Sports, seemed like an extremely reliable source at the time. With over 12,000 followers and just as high a reputation, Marquette fans positioned their foot on the gas pedal — getting themselves ready to explode into exultation at any given moment. And after a few other speculation tweets, the dagger finally came:

At first, Michael Cianciolo, MUTV Sports Director, didn’t seem like a very reliable source. But he was indeed a Marquette student, semi-employee, and a fan as well (or so we thought) — so, not only did we then hit the gas pedal, but we absolutely floored it. The Shaka-To-MU tweets came down in a heavy downpour, and it seemed to be only a matter of time until a reporting giant confirmed the hire. Until then, there were multiple reports that there was going to be a press conference at 5 pm to introduce the new coach:

@powderhokie should be official around 5

These reports were, of course, dead wrong. I honestly don’t know how they even surfaced, because not only had the press not been contacted…

I found it hard to believe that there would be a media announcement without, you know, contacting the media. #JustSayin #ShakaWatch

…BUT SHAKA SMART HADN’T EVEN LEFT THE VCU BASKETBALL OFFICES:

Whoever said Shaka is en route to Marquette and that there's a presser at 5 CT needs to check their sources. Has been in VCU bball offices.

So, the Marquette Tribune soon reported that not only was there no announcement, but Marquette was nowhere near hiring Shaka Smart as well:

FINALLY, a trustworthy report — even if it was a depressing one as well! A few conflicting tweets still remained, so ESPN’s Jeff Goodman later attempted to put a halt to the madness:

Here's the update on Shaka Smart and Marquette for all those asking. Nothing done, nothing imminent – per multiple sources.

Okay, now that an ESPN employee had refuted the rumors, there couldn’t possibly be any more contradicting reports, right? NOT TODAY, MARQUETTE FANS!! JIM GANZER TO THE RESCUUUUUUUEEEEE:

DEAR. GOD. Due to this horrendously wrong tweet, “#DoneDeal” has become a new thing on the Marquette Twitterverse. In fact, you can order vintage Marquette Warriors shirts with “#DoneDeal” on the back for only $17! (A portion of the proceeds goes to maintaining Buzz’s Bunch, an sports program started by Buzz Williams for kids with special needs. Plus they’re snazzy shirts, and all your friends will think you’re groovy and hip and all that jazz).

Many other reliable sources immediately debunked Ganzer’s report, such as Paint Touches and Mike “Da Savior” Hunt, emperor of the Milwaukee Journal-Sentinel:

It very well may happen, but I can report Shaka to Marquette is not a done deal. #mubb

#mubb Shaka Smart deal not done from what I'm told.

BUT IT DOESN’T STOP HERE! Multiple Milwaukee news stations still went along with the story — below is a video compilation of false news reports from DeadSpin’s article:

Welp, better luck next time. Let’s do it all again tomorrow, shall we?

Welcome to the Daily Eagle – a blog and twitter feed of all things Marquette basketball. Follow us on Twitter at @Daily_Eagle for live updates on recruiting, games, facts, and the occasional opinion. For inquiries, contact us at dailyeagle@yahoo.com.

We blog about Marquette basketball.