Henry Ellenson is a perfect fit for Marquette’s roster. As a 6’11” big who can stretch the floor, he fills a dire need for protecting the rim, rebounding the ball, and spacing the offense.

From a basketball standpoint, it’s a shame that Ellenson is a missing piece, and that’s because he is, as of June 23rd, also a Detroit Piston.

How does Marquette succeed without him?

It matters less that Ellenson left and more that Marquette failed to replace him. The team prepared for his departure from the day he stepped on campus. After losing recruiting battles for Duquesne transfer L.G. Gill and for three-star prospect Kalif Young, Marquette must find ways to win in the upcoming season without a multitude of reliable big men. But, first, the situation begs: Is it even possible?

Spoiler: Yes. Below are three examples.

It is possible to succeed with a short lineup, even if it means below-average results in rebounding and on defense. How, then, is this success achieved?

There are many ways in which a team can overcome a lack of height. A common and effective way is through great offense and ball protection.

*Offensive eFG% is the same as field goal percentage, except it takes into account that a three is worth more than a two. It is a good way to measure offensive efficiency.

All three teams played well enough to receive bids to the NCAA Tournament despite mediocre-to-poor results in defending or rebounding.

**Villanova’s defense was, unlike the other two examples, exceptionally good at making opponents miss. Still, however, the Wildcats were either average or poor at rebounding.

Again, a short team can win games by being really efficient at scoring and in limiting turnovers. There are other ways to make up for size–like excellent defense–but these ones seem to be more common and effective.

So, does Marquette have the personnel to be exceptionally efficient in playing offense and limiting turnovers? Let’s take a look at last year’s team, plus the additions.

With star power and a talented, deep supporting cast on offense, Marquette’s overall Offensive eFG% should improve. Sure, Ellenson may have provided extra spacing for his teammates, but this season’s team can provide spacing for itself with its abundance of good shooters. So, can the Golden Eagles protect the ball as well as they score?

Last year Marquette was one of the worst teams in the nation at offensive turnovers. A whopping 20% of its possessions ended with the ball in the other team’s hands. The previous season’s rate wasn’t much better at 19.3%.

To become a top-50 team in protecting the ball, Marquette would need to lower its Offensive Turnover % by at least 4%. That doesn’t sound like much, but the difference between the 100th-ranked team and the 300th-ranked team is only 3%. This is literally asking Marquette to jump more than 200 spots in the national rankings in only one year.

Who were the Golden Eagles’ worst offenders in Turnover Rate?

…which is the entire team, minus Henry Ellenson at 15.2% (and that’s just average). Guess who’s the only significant contributor not playing for Marquette next season?

Again, it will be hard to replace Ellenson.

Luckily two of Marquette’s newcomers aren’t horrible ball-handlers. Rowsey has a 15.1% TO Rate, and Reinhardt’s clip is 15.4%. Those numbers are average but at least not terrible.

With an extra year of experience and the addition of two college basketball veterans, Marquette seems bound to cut down on its offensive turnovers. But it is a tall task to improve from a horrible to a very good team at that category in just one year.

If Marquette is exceptionally good in playing offense and in limiting turnovers, it can overcome its lack of size. It seems like the Golden Eagles can achieve the former. As for the latter: Only time will tell. 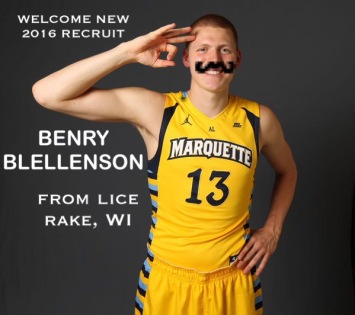 2 thoughts on “How Can Marquette Overcome Lack Of Size?”

We blog about Marquette basketball.